The diagram above shows the t-rail portion of the layout. The main board is 33' x 7½'. Track in black is the loop and yards on the main level. Track in green is a t-rail dogbone. It begins underneath the existing SG layout, emerges at zero elevation and then climbs a 3% grade, looping once around the mountain before disappearing to the upper reversing loop (inside the mountain).

Higher up the mountain (indicated in dotted track) is the Lionel OO dogbone. Both reversing loops are hidden inside the mountain, so you'll only see the train looping up the top of the mountain.

If it all works as planned, the 700E Hudson with freight set will emerge on the right side of the layout, chug up the grade, climb around the mountain a couple of times, and disappear. Moments later, its OO clone will reemerge at the top of the mountain, continue the climb, and disappear again. After a suitable interval, The OO consist will come back down its grade, disappear, and reappear in O gauge to complete the descent. We shall see...

After years of talking about it -- and fiddling with layout design with RR-Track -- I finally made the trip to Home Depot for lumber with best-friend-Bob and got the damned thing started. I only had 5 partial days...

At the end of day 4, about 45 running feet of track. We finally quit at 1am when we ran out of fishplates.

FYI, bolting those tiny fishplates onto the track with even tinier nuts & bolts is slow goin'. And of course, every 75 year-old track section had to have old hardware removed and the conducting areas wire-wheeled clean; turnouts tested and oiled... Well you get the idea. It wasn't exactly like snapping fasttrak together. But it will be WAY cool if/when I ever get it done. 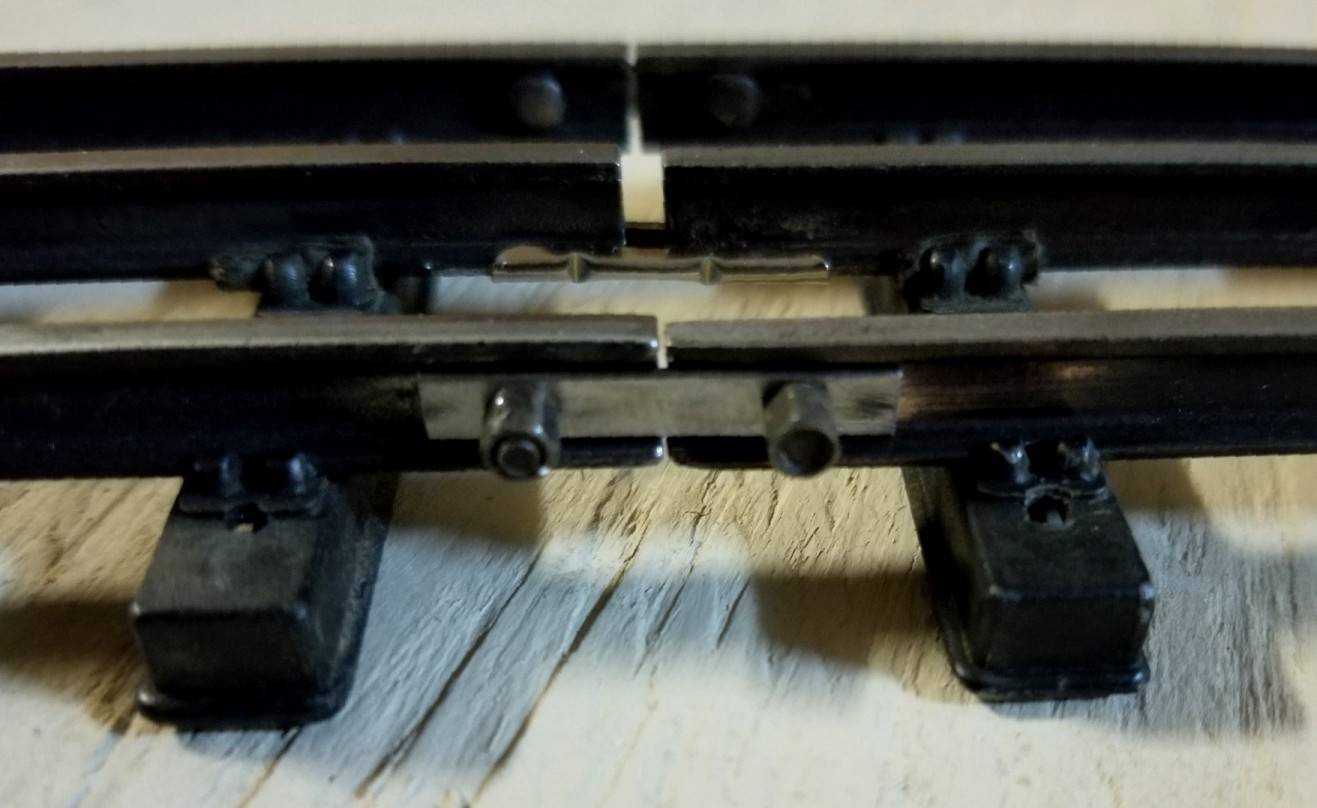 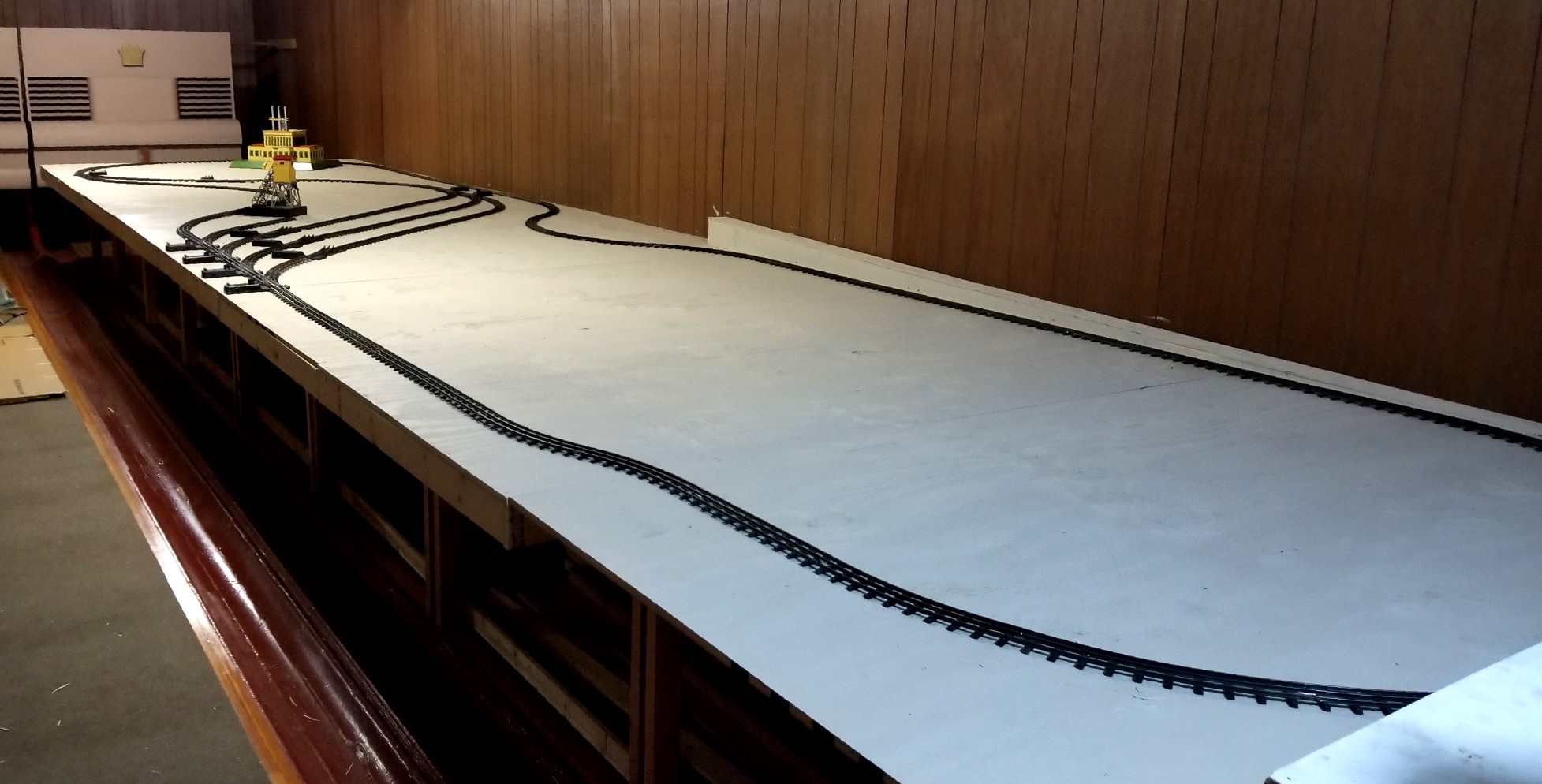 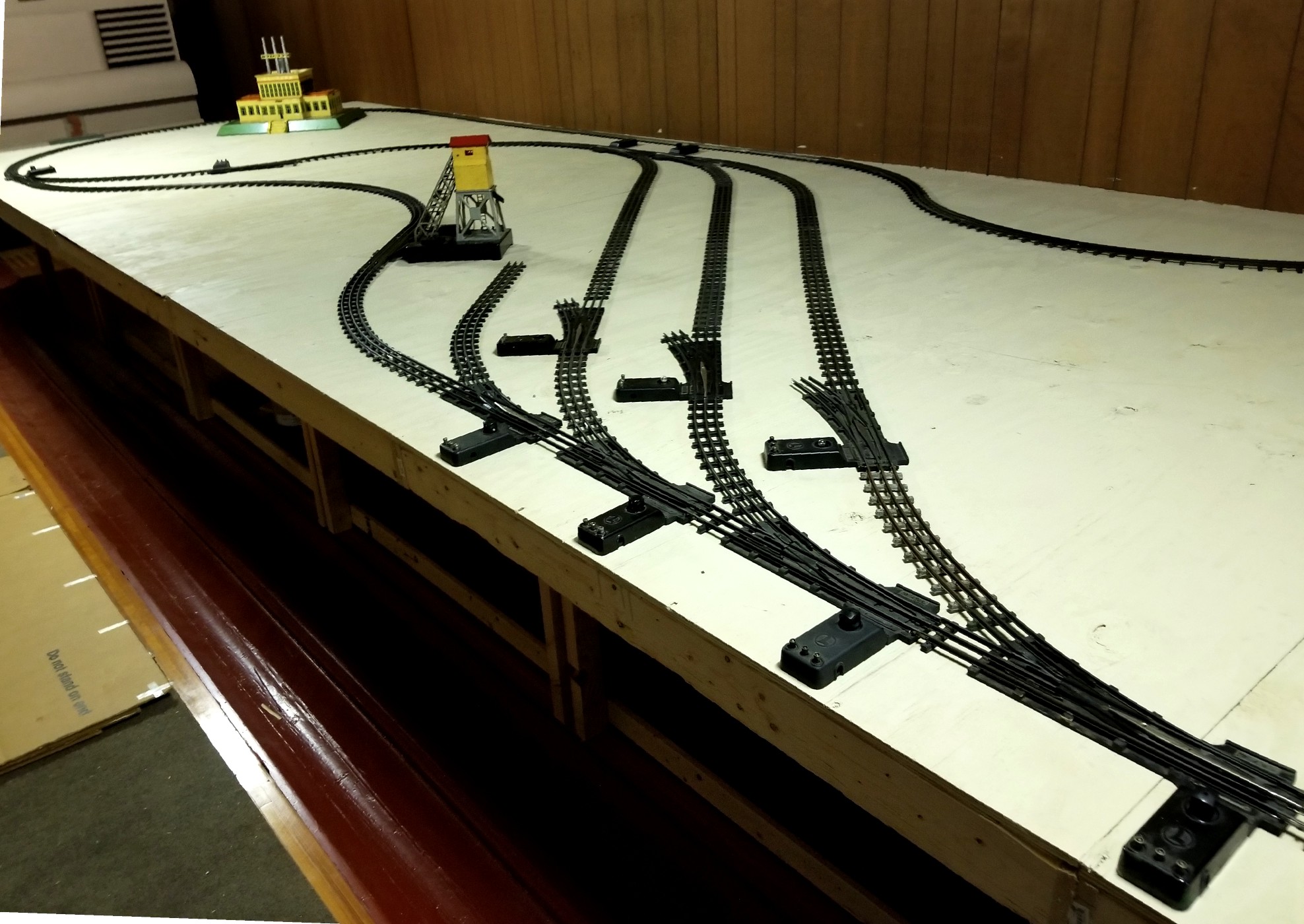 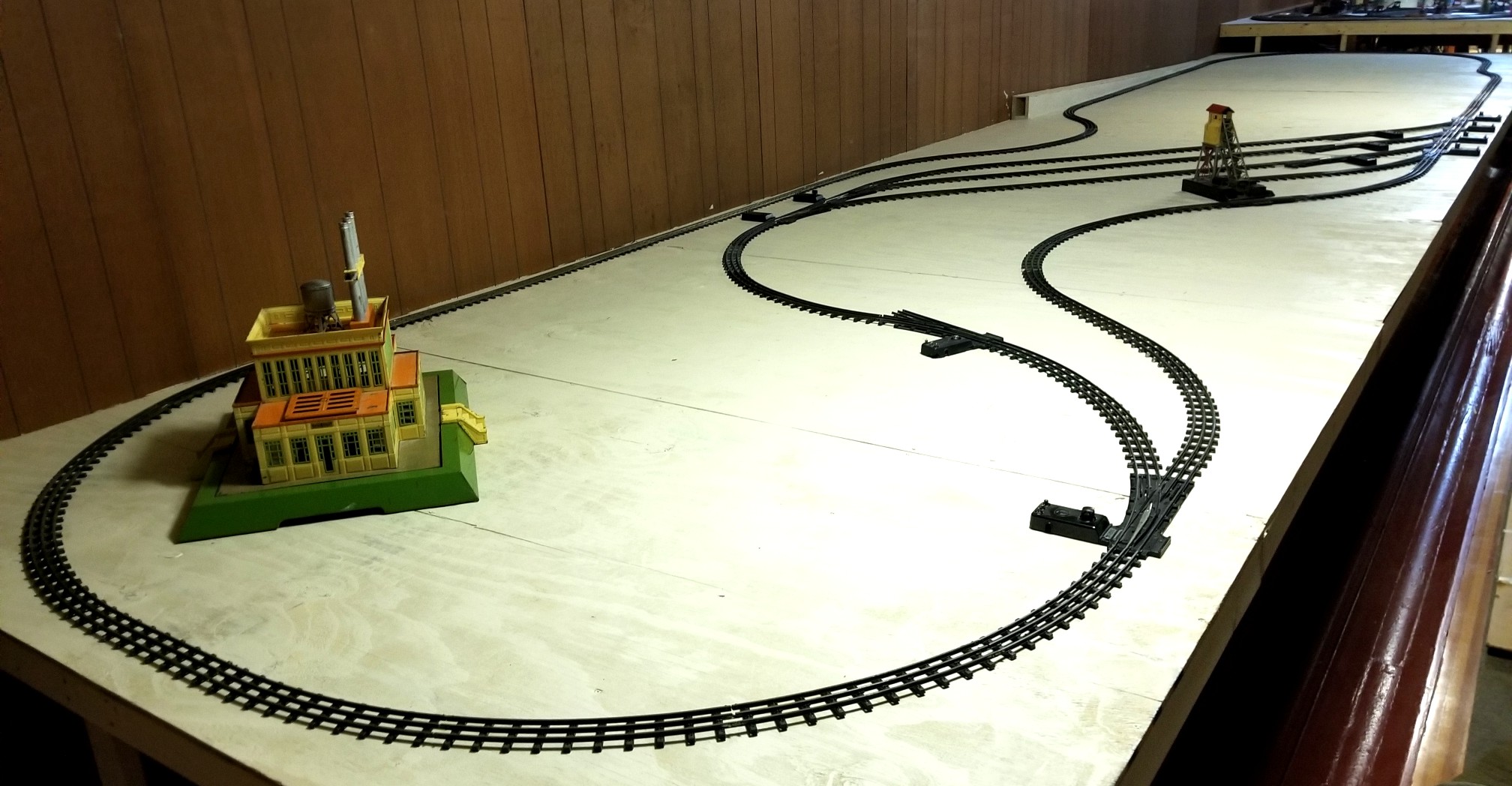 Yes, this is how I spent Christmas day. Then the husband (kindly) bolted on fishplates all day the 27th. This time we ran out of nuts & bolts. 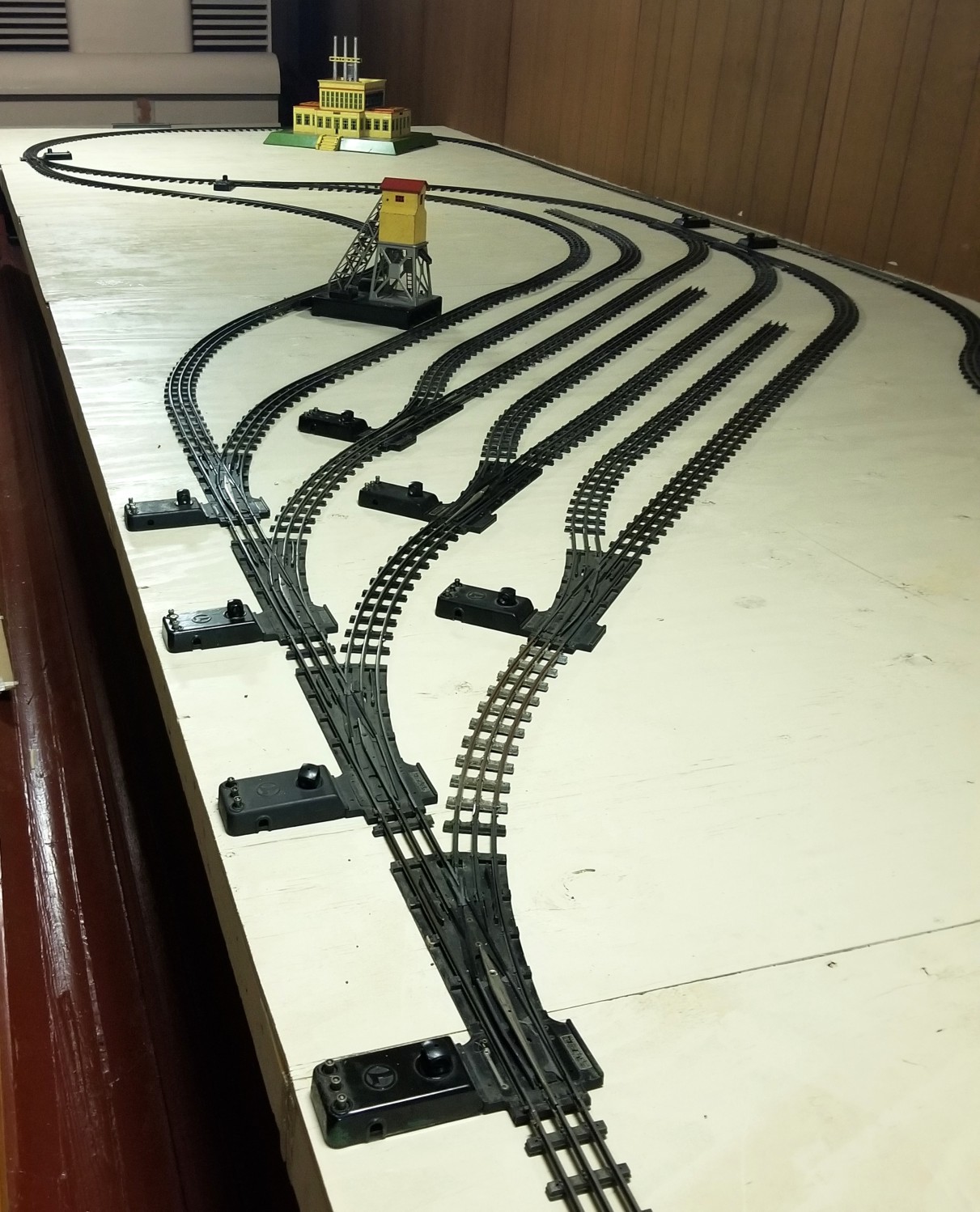 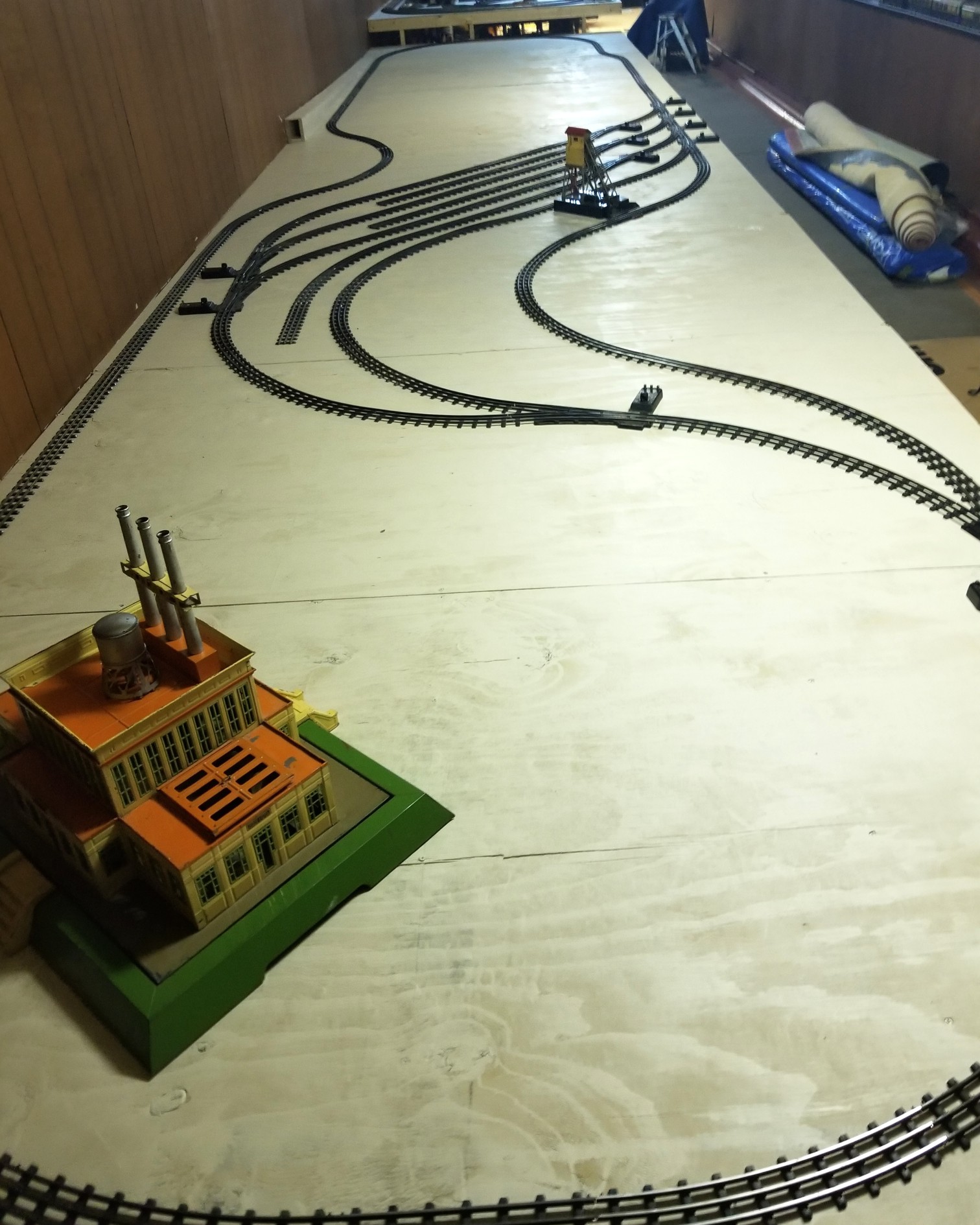 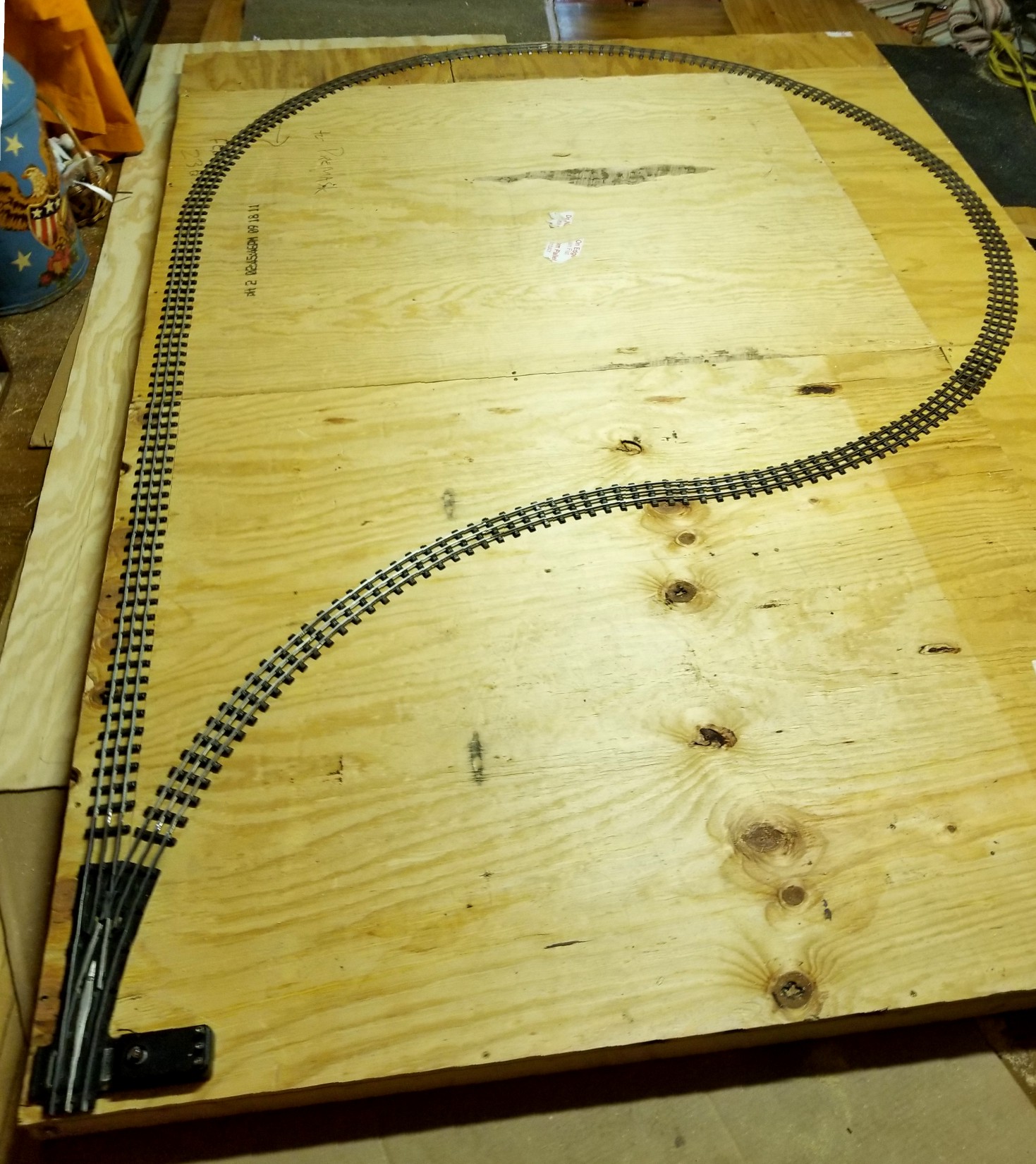 Above, the main-level track is all laid. At right is the first section of the dogbone that begins under the SG layout, then starts up the grade. I had to build it separately because...

Below you can see just how much clearance there is for the "hidden" loop under the SG layout. No, it's too dark under there to see the track - but it's there. Laying it in place would have been... iffy? The dogbone is actually Marklin t-rail -- which I found (to my surprise) slightly pre-dates Lionel t-rail. Who knew? They're almost identical. I wonder where Joshua got his idea??? 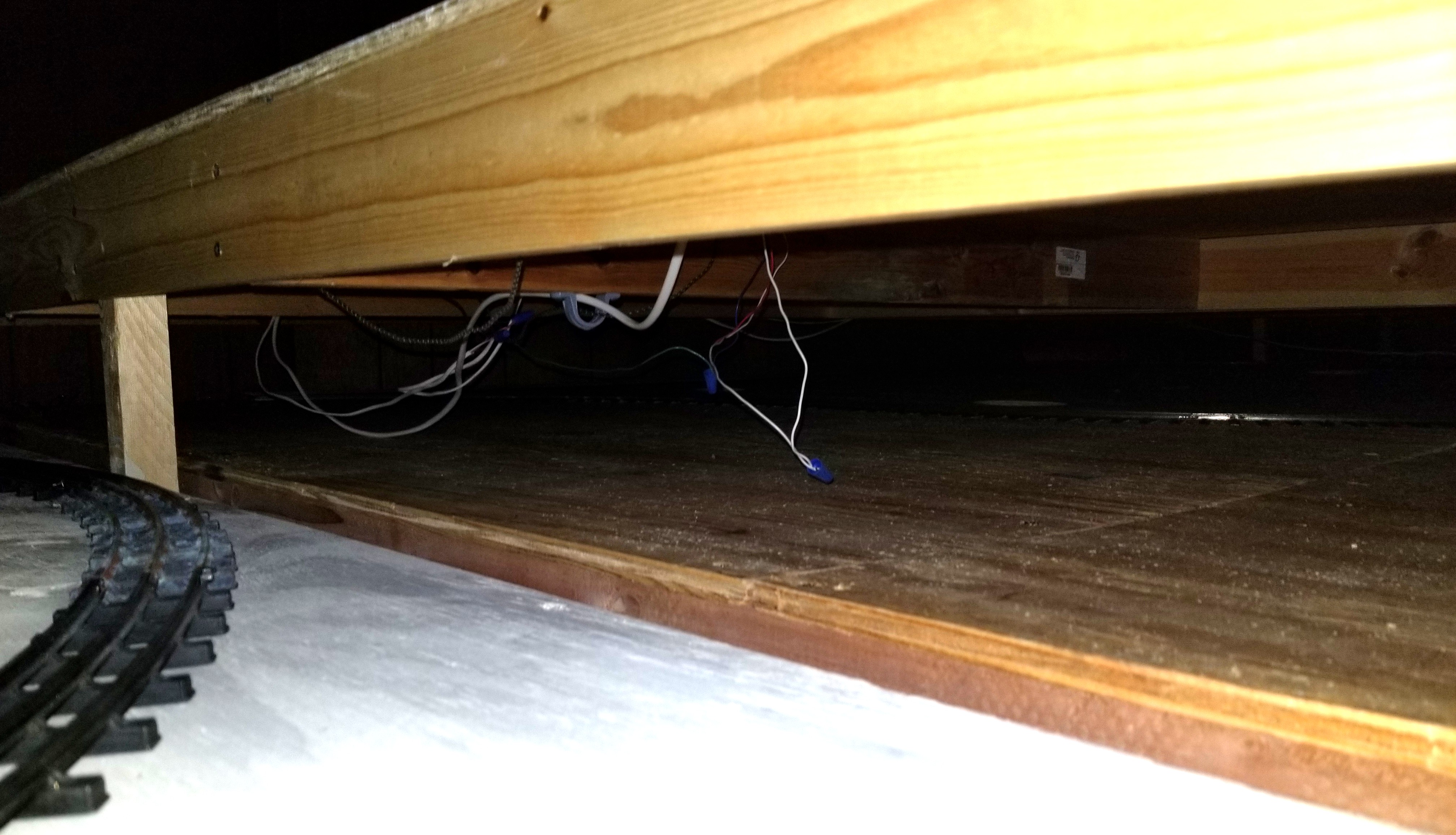 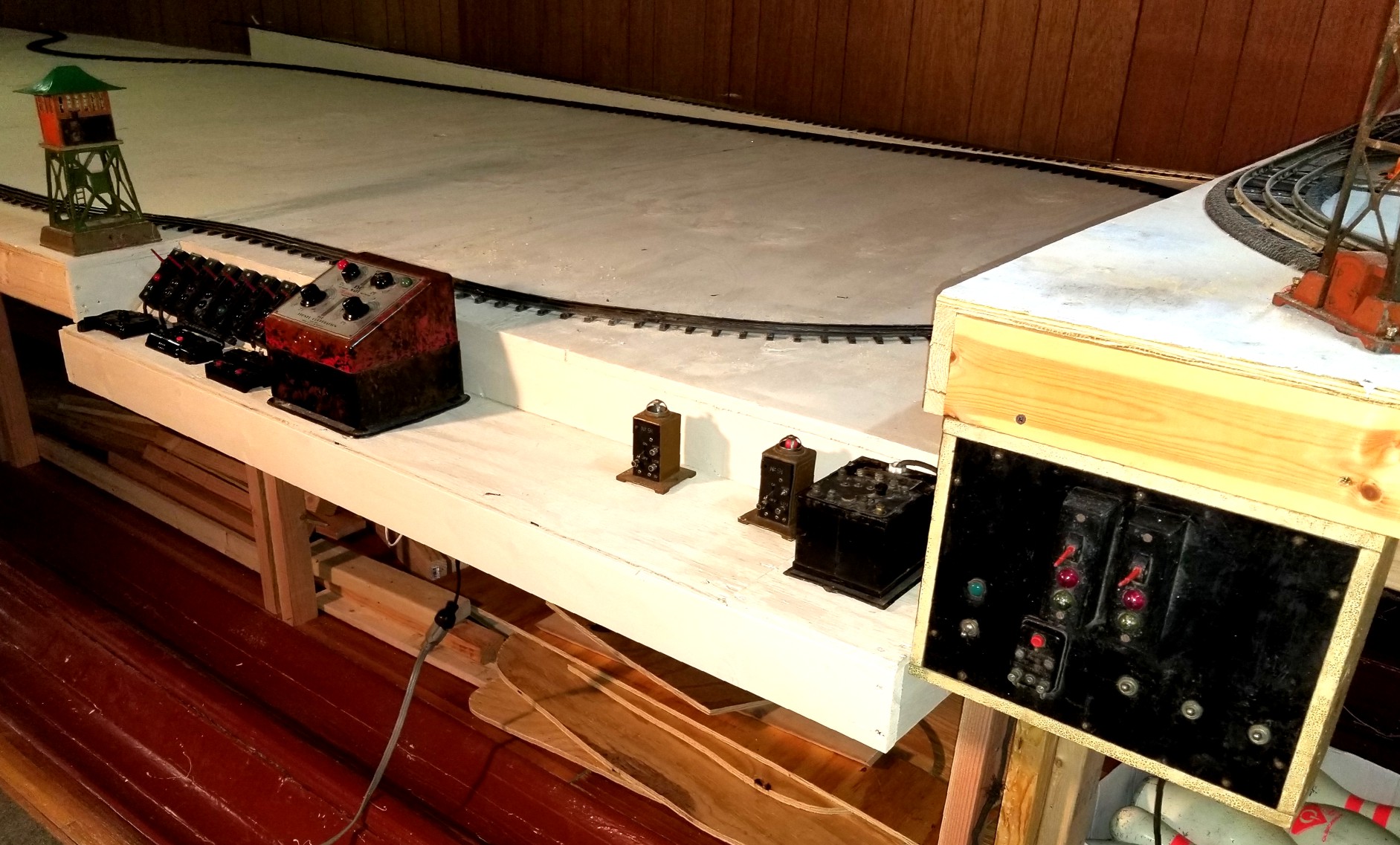 On the last day -- as usual -- I ran out of something: T-rail straighs this time. So I decided to start the control area. The "black box" on the far right is a home built, prewar control panel I picked up at York for 15 bucks. I'm not sure what it's going to control yet... But I like odd, ancient relics like that.

If you visit the "Layout Videos" page, and click "T-Rail Test," you can see the first test run of my BEEP engine around the main loop. OK, not truly exciting cinema... unless you'd just laid all of it. 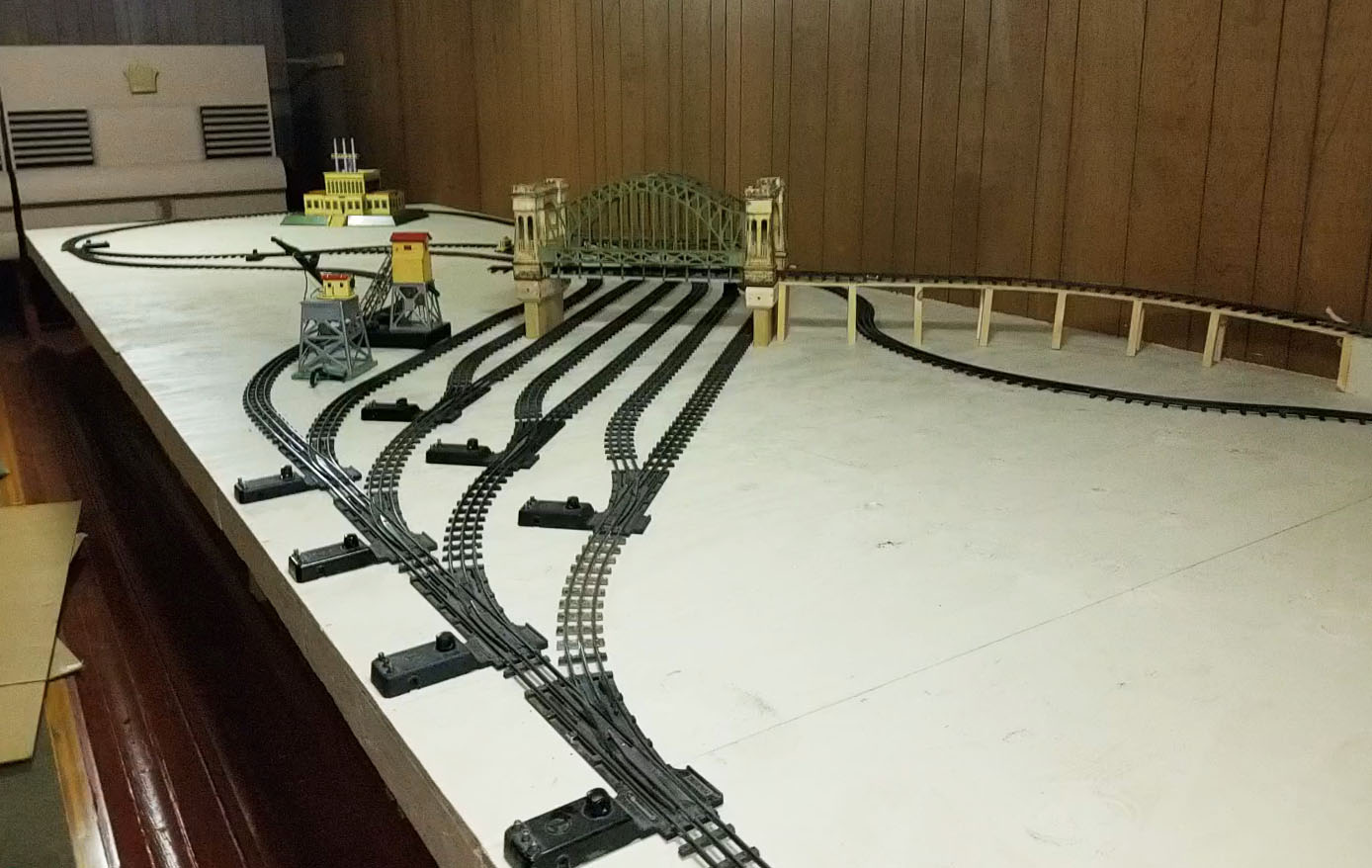 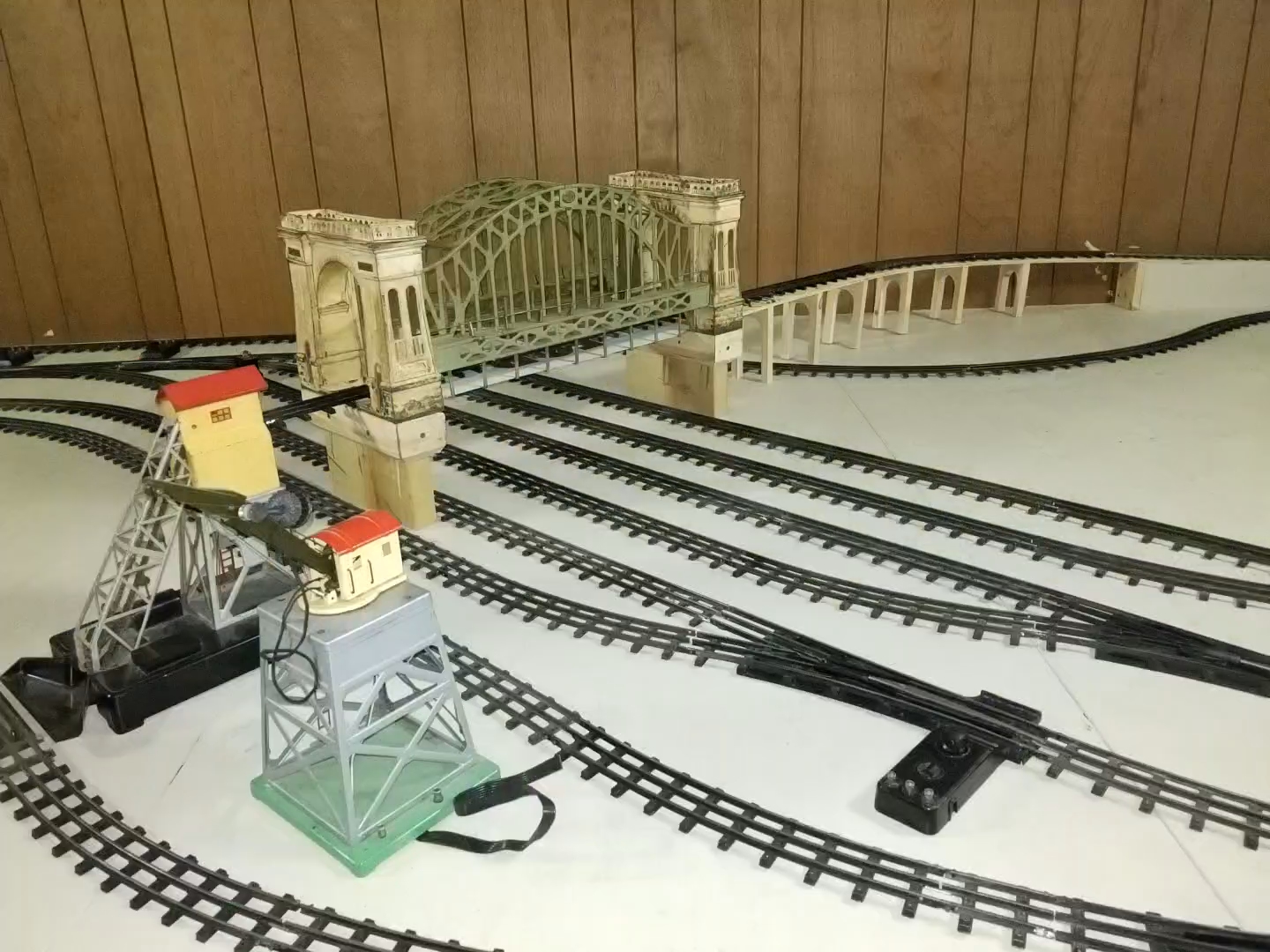 We only had two afternoons, but the Hellgate Bridge is up, as is the approach. Of course, it still needs painting, and the entire mesa it's leading to is missing... But it's progress!


This 'holiday' construction thing seems to be becoming a pattern. But yes, Thanksgiving day and my birthday were spent (how else?), building grade, mesa top, and laying t-rail. Some paint and track-joins remain to be done, but the t-rail dogleg above (and below) the main loop is pretty much complete. I'd been dreading all that grade. Ignore the 2x4 grade supports, etc. These tracks are looping up the side of a mountain, so eventually all the structure will be hidden. And I even thought to include a service hatch so I'll be able to actually GET to the hidden reverse loop. Will wonders never cease?

About two months into the Covid-19 emergency, we decided to ride it out in Kansas. Between woring from home, a drive to California, family, etc., I'm not really sure how many days I actually worked on the layout -- probably no more than about 10 full days all told -- but a lot got done. Not as much as I had hoped, but quite a lot.

All the t-rail got adjusted, aligned, and nailed to the deck. 13 turnouts were wired to controllers, and 8 sidings wired to vintage knife switches. Two switch towers became illuminated, and the #97 Coal Loder & #165 Magnetic Crane were both serviced and wired up -- as was the custom t-rail RCS track. The scale Rail Chief streamliner cars were rewired, and their Zinc-pest addled bellies were replaced and painted. Both the 700E 701 Switcher and the 003 OO Hudson were all completely disassembled, serviced and reassembled, and are now (finally) running. The platforms for both the upper and lower OO loops were built and installed on top of the moutain, and the upper OO reverse loop track was laid. On the last day, I put a few more favorite stations in place.

I left Kansas a bit disappointed that I hadn't gotten as much done as I'd planned. But looking back, I guess a fair amount DID get accomplished. Here are pics of where it all landed:

My life took an abrupt and all-encompasing shift on February 2 of 2021 when my stepfather died suddenly. Everything went on hold -- especially trains. In October, my husband and I made a permanent move from NYC to Kansas to be near my mother, who's soldiering through some serious health issues.

I'm still working full time in NY via remote, helping ma with the day-to-day stuff, overseeing the 1885 Victorian, outbuildings, yard and vehicles... That's just to say, there isn't a ton of spare time for the trains. But I manage a few hours a week, mostly on weekends. And when I looked around after 8 months, amazingly, some progress HAD been made. Here's where we are:

The control panel above: All vintage control equipment with cloth covered wire. Well, alomst... You can see in the lower right corner a distinctly non-vintage DC power supply. OK, I'm cheating, but the gauge-1 seems to like DC better.

Repairing the Gauge-1 track, turnouts and engines took forever. But since almost all of it is 100+ years old, I probably should have been prepared. The piece below alone took a couple of days (bead blasting not included). But considering my soldering skills are nill, I was absurdly pleased with myself when it actually worked again.

Where's the OO dogbone that was partially complete in earlier pics? I obviously believe that "If something's worth doing it's worth re-doing," having re-laid the track on my postwar O layout at least 3 times. I try to think of these as 'learing experiences.' In short, the 2-rail Lionel OO has been ripped up and will be replaced with 3-rail OO. The tighter curve radius will work a lot better... Maybe.

For videos of a couple of operating accessories, and a few trains running on the layout, visit the "Layout Videos" page.

Next, as I find time: Finish the monorail track; relay the OO, then there's months (years?) of wiring accessories, placing buildings, landscaping... And it'll be done! (Well, until I rip up something else.)