A taste of the history behind Tango Masculino

Tango was born in the back-streets and brothels of the Buenos Aires underworld.  It was danced in the poorest arribals, tough outlying districts of the city that were peopled by the Lunfardo, an underclass of street-toughs, prostitutes, thieves, 'maricas' in drag and youths from the upper classes slumming for adventure and sex. 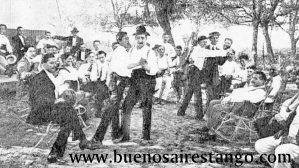 Considered too lewd to be danced by women at the turn of the century, the tango was at first a dance of  men -- whiling away time while waiting in a brothel for one of the ladies of the house, at street dances or on the enclosed patios of the slums.  In the beginning it was considerably less refined and perhaps more visceral than the dance we have come to know. This early tango was more lively, more overtly sexual, more combative. It was not a dance of romance -- more a display of power, each man trying to outdo his partner in a heated display of sexual prowess and machismo. 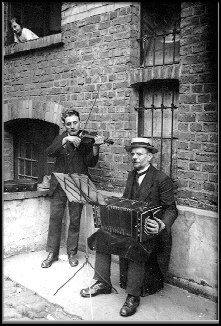 Early on, there was only the music of the organ grinder to accompany this new dance. Soon, tango was played by street musicians carrying their instruments: Bandoneón, violin, guitars and flutes, from corner to corner, bordello to bordello.

Turn-of-the-century Buenos Aires was also a city of men. As the fabled gaucho culture ended on the pampas, thousands of young men fled to the city for work. Tens of thousands of foreign immigrants also flocked to the "Paris of the Americas" from all over Europe: Jews, Italians, Russians and Spaniards -- mostly young and male -- seeking their fortune.

This was a period when few respectable women would dare venture onto the streets without their husbands. Unmarried girls were fiercely guarded and chaperoned. At the same time the male population of the city had ballooned to the point where men outnumbered women by huge margins. As is often the case -- whether 19th century sailors, English boarding schools, or modern prisons -- whenever a large population of sexually active young males finds a dearth of available females, unusual homosexual subcultures tend to develop. And so it happened in these turbulent decades in Buenos Aires. Italian 'models' -- macho male hustlers -- openly plied their trade in the notorious Plaza Mazzini at night.  Effeminate drag prostitutes were available both on the streets and in many of the otherwise 'straight' bordellos.  'Marriages' were celebrated in private parlors between transvestites and men who saw themselves as straight.  Police, civic authorities, clergy and social psychologists of the period all registered their moral outrage at the 'maricas, invertidos y urinistas' suddenly threatening the fabric of their society.

Coupled with this was the particular sexual code of the Lunfardo. Virtually any sexual conduct was permissible for a 'normal' male -- so long as he assumed the active, or 'male' role. Social stigma, and the labels of 'marica' or 'maricon' were reserved for effeminate gay men, often dressing in drag, and in some ways embracing the traditional 'feminine' persona as much or more than real women. To bed another man, to dominate the partner sexually, was considered something of a feather in the cap of the tough-guy of the slums, a way of asserting his place in the pecking-order as much as a sexual act.

The culture of the Lunfardo was already comprised of those on the fringes of society, people living outside the rules and often beyond authority. Transvestites and drag prostitutes became an integral part of the subculture of brothels, drugs, knife-fights and smuggling -- never perhaps attaining the status of 'real' men, but nevertheless attaining a role and acceptance impossible elsewhere.

All this made up the world that gave birth to the Tango -- a few short years in Argentine history that created a unique culture that could only have existed in that particular time and place. This is world of Rosendo and Jorge -- the world of El Compadrito, El Langa, La Marica, La China Croilla and El niño mal de familia bien, archetypes that have endured to become a lasting part of Argentine folklore.

By the '20's, a police crackdown in Buenos Aires had closed most of the bawdy-houses. The tango, which had been brought to Paris by the rich Argentine youths who had frequented these establishments, became the rage there. Its sojourn in France -- the arbiter of the period of all things cultural -- had made the dance 'respectable'. Soon, this dance of pimps and thugs had moved into Argentine dance-halls, cabarets, and even the salons of polite society. The tango would go on to evolve into one of the world's most sensual, complex, and beautiful dances, but the gritty world that spawned it -- the world of Tango Masculino -- had faded into legend.

“[The tango] at first was danced separately like the candombes; later the dancers came together and transformed the dance into one for partners intertwined, preferably men; thus it passed into the brothels.”

“I’ll add another curious example: sodomy. In all the countries of the world, an indivisible reproof falls upon both parties of that unimaginable contact… Not among the tough guys of Buenos Aires, who proclaim a kind of veneration for the active partner – because he has put something over on his companion…”

“People in the street are lavish
with vulgar approval.
For to the rhythm of the tango ‘La Morocha,’
two men from the slums dance in a lewd embrace.”

Back to Tango Masculino